Saint having seven tons of fun 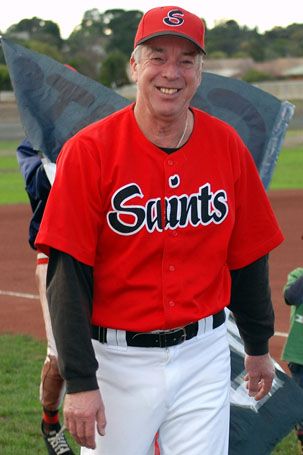 ``The occasion might have been too much, I had to run through a banner, mum and dad were there and even my grandson was there. I was a bit overawed by it all,'' Alldis, 60, said yesterday.

The only cloud on the milestone was the Saints' 11-8 loss to Guild in C grade.

Alldis has been wearing the Saints colours for 44 years and is the only foundation club member still playing.

But he doesn't hold the club's games tally record.

``My younger brother Murray has played about 20 or 30 more games,'' Alldis said.

``I played with Sunshine in Melbourne for a year and I missed a year down here to help assemble the clubrooms at Pioneer Park. We'd got old rooms from the Highton Bowling Club in five pieces and five of us put them together,'' he said.

The big Alldis family has deep roots with the Saints.

Alldis' father Cliff, a former top cricketer, got tired of driving his five boys to baseball so, at 44, donned a uniform and took up the game himself.

He played 85 games with the Saints, while his other sons,  Michael, Peter and Gary have also been veterans at the club.

Alldis is attracted by the team nature of baseball and is happy to continue playing.

``Cricket can be dominated by two star batsmen but in baseball the batting goes around the nine players, everyone gets a turn,'' he said.

Alldis described himself as a scratchy batter who over the years had ``a good set of wheels''.

Alldis isn't the oldest player at Saints. Lining up alongside him on Saturday were Ken Rickard, 65, and Alan Morris, 64.